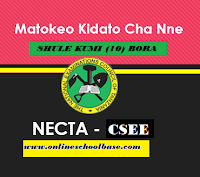 The Curriculum continued to be under the Ministry of Education and the University College, Dar es Salaam until when it was taken over by the newly established, autonomous Institute of Curriculum Development (ICD) in 1975, which in 1993 was renamed as the Tanzania Institute of Education (TIE)

Between 1972 and 1976 the first staff of NECTA were recruited, among them was Mr. P. P Gandye who was recruited in 1972 and later on in 1994 was appointed as Executive Secretary. The other staff members continued to be recruited and especially so when NECTA's premises moved from the Ministry of Education Headquarters to the present premises at Kijitonyama near Mwenge. Presently the number of NECTA's staff is more than 250.
Top 10 Best Schools Form Four Results 2021. Shule 10 Bora matokeo kidato cha nne 2021. The national Examination Council of Tanzania (Necta) has announced NECTA form four Results today January 15, 2022 who sat the ordinary certificate of secondary education exams in 2021 with girls dominating the top list.

According to the list released by Necta all the top 10 schools are privately owned with the exception of Mzumbe,  the schools that led in the exams that were done in November are:

As a result, Dr Msonde has announced 10 best performing schools in the national exams come from various regions.
CHECK SHULE 10 BORA KITAIFA FORM FOUR RESULTS 2021 HAPA CHINI: The council also announced top 10 schools in the exams that were held in November 2021, the schools that led are as follow below: