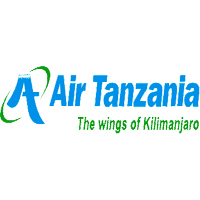 Air Tanzania Company Limited (ATCL) is the national airline of Tanzania, IOSA certified and a proud member of IATA based in Dar es Salaam, with its hub at Julius Nyerere International Airport. Air Tanzania Company  (ATCL) was established in 1977 following the dissolution of East African Airways and has also been a member of the African Airlines Association (AFRAA) since its inception. Air Tanzania is a government owned airline with a total of eight aircrafts in its fleet; Four Dash 8-Q400, two Airbus A220-300 and two Boeing 787-8. Dreamliner.

There are plans to integrate the Dash 8-Q300 that is in maintenance into the current fleet taking the total to 9 aircrafts by June 2021, an additional Dash 8-Q400 and two more Airbus A220 300 are expected to be delivered by July 2021 taking the total number of aircrafts to twelve. Vision To be the airline of choice that exceeds customers’ expectations. Mission To our employees: To provide a working environment for our employees to excel through constant training & development and supported by an effective reward and recognition program.

Therefore, applications are invited from qualified Tanzanians to fill the following vacant position. View full details from the PDF Document attached below: