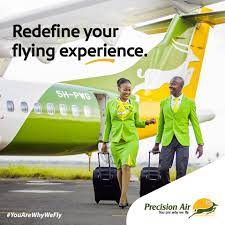 Precision Air was established in 1993. It started as a private charter air Transport Company operating a five-seater piper Aztec aircraft. Its initial line of business mainly entailed providing connections to tourists visiting the rich natural attractions of Serengeti National Park, Ngorongoro Crater, in northern Tanzania, the Zanzibar Island in the Indian Ocean and other parts of the country from Arusha town as its base.

Precision Air is currently headquartered in Dar es Salaam- the commercial city of the United Republic of Tanzania.   The airline’s main services include; scheduled flights, chartered and cargo air services which are growing at an impressive rate. In May 2009, Tanzania Civil Aviation Authority (TCAA) granted the company a self-handling license and ground handling operations started at the beginning of November. The airline is seeking a third party ground handling license from TCAA.

On the 21st December 2011 Precision Air made history by being the first airline in Tanzania to list on Dar es Salaam Stock Exchange with a total of 7,056 (Seven thousand fifty six) investors who took part in the Initial Public Offering in November 2011.

We wish to invite applications from suitably qualified candidates to fill in this challenging positions below: