Mwananchi Communications Limited is a subsidiary of Nation Media Group. It is the leading print media company in Tanzania with print as well as online platforms. It was established in May 1999 as a Media Communication Limited and transformed to the advertising & Public Relations agency in year 2001 and was later acquired by Nation Media Group in the year 2002. Through Newspapers, we deliver a literate and informed audience who are opinion leaders, early adopters, and heavy consumers of different brands and service

Our print also delivers a mass market audience ranging from the young and upwardly mobile to the lower/ middle class who are mainstay of the Tanzania economy. Our Digital platforms provide you with an urban and peri urban audience and allow you a window into the world. It is the most effective way to reach anybody out there both local and international with an interest with the Tanzania and East Africa market.

MCL is in need of individuals to fill Graduate posts as shown in the document below: 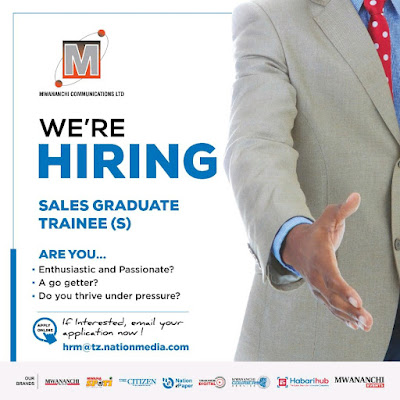