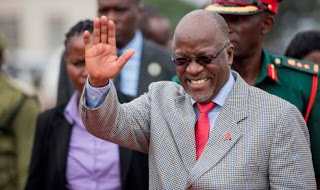 In a televised speech on TBC , the Vice President announced that the President died of a heart condition on March 17, 2021, at about 6pm at Mzena Hospital in Dar es Salaam where he was admitted on March 14.

The Vice President said Magufuli was first briefly admitted to the Jakaya Kikwete Cardiac Institute on March 6, but was subsequently discharged.

But he was rushed to hospital again on March 14 after feeling unwell. She announced that the nation will observe  a 14-day  period of mourning.

According to the Constitution the Vice President Samia Suluhu Hassan is now the acting president of Tanzania.

While a date for her swearing in has not yet been announced, she will be Tanzania’s first female president.

John Pombe Magufuli, the son of a peasant farmer who became Tanzania’s president in 2015, has died aged 61. Once praised for his no-nonsense approach, he went on to become a controversial leader, especially over his response to the coronavirus pandemic.

He was elected for a second term in 2020 amid opposition accusations of fraud and intimidation.

Before he was president he acquired the nickname “the bulldozer” for driving a programme to build roads as minister for works, and later was hailed for his anti-corruption stance and his distinct dislike for wasting money.