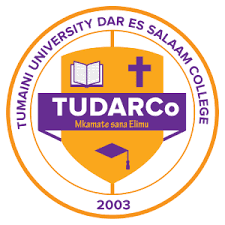 Tumaini University Dar es Salaam College (TUDARCo) is a Constituent College of Tumaini University Makumira since 1st April, 2003. TUDARCo is owned by the Eastern and Coastal Diocese (ECD) of the Evangelical Lutheran Church in Tanzania (ELCT). The institution was granted, by the Tanzania Commission for Universities (TCU), Certificate of Full Registration on 29th March, 2007; it was also granted its Charter in 2010; and attained and was granted Certificate of Accreditation in August 2019.

TUDARCo premises are located along Coca Cola Road, and it currently has a student population of about 3,500. It delivers undergraduate and postgraduate degree programmes as well as Certificate and Diploma programmes.

Its various academic programmes are hosted and delivered by its four Schools, namely; School of Law and Justice (SoLJu), School of Business Studies (SoBS), School of Education and Human Development (SoEHD), and School of Humanities and Social Sciences (SoHSS). TUDARCo is currently being re-engineered and re-branded with a view to transforming it into a competitively dynamic and vibrant university institution.

B: Positions being Advertised

TUDARCo now wishes to recruit additional academic staff for the School of Law and Justice (SoLJu) and the School of Education and Human Development (SoEHD).

School of Law and Justice (SoLJu):- Lecturer/Senior Lecturer: One (1) position

Holder of a PhD in Linguistics, from a higher learning institution recognised by TCU.

Successful candidates will be offered attractive packages commensurate with their qualifications and experience.

Applications should be addressed to the Provost using the address below
or the e-mail address provost@tudarco.ac.tz