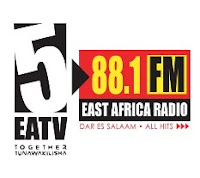 East Africa Television (EATV) is the first and only free to air television station uniting Tanzania, Kenya and Uganda that targets the vibrant and growing youth market of the 18 to 35 age group.
EATV's programming covers a variety of issues from News, Current Affairs, Lifestyle, Entertainment and Social facets making it the leading local content producer in Tanzania and across the region.

Recently, EATV added several new programs to it's line up namely Wakilisha and Tambuka which have expanded it's viewership base.

EATV programs are of the highest quality, delivered in various formats such as Talk-show, Magazine, Reality, Factual and Interactive.

All the above achievements make East Africa Television the number one youth channel and the most popular television station in the region.