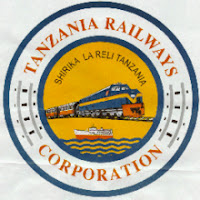 The Tanzania Railways Corporation (TRC) is a state-owned enterprise that runs one of Tanzania’s two main railway networks. When the East African Railways and Harbours Corporation was
dissolved in 1977 and its assets divided between Kenya, Tanzania and Uganda, TRC was formed to take over its operations in Tanzania. In 1997 the inland shipping division became a separate company.
TRC’s gauge is 1,000 mm (3 ft 3 3⁄8 in) and the length about 2,600 kilometres (1,600 mi). Two east–west lines linking the coast and the hinterland were built under colonial rule as German East Africa: the Central Line runs from Dar es Salaam to Kigoma, and the Tanga Line from Tanga to Arusha.

TRC has released Official Notice about fake Job opportunities that was trendig on Social media like WhatsApp, the following below is official announcement from TRC.
Ignore scams jobs 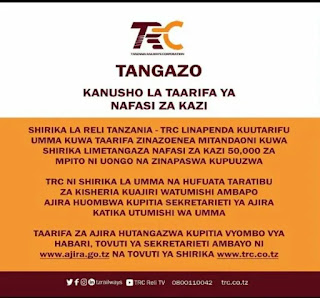 A north-south connection, from Korogwe to Ruvu, links the two lines. The main line runs to Lake Victoria where a connection operates via Lake Victoria train ferries with the Uganda Railway. From the Tanga line a line to Kenya is disused.