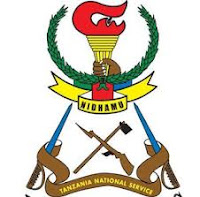 Preparing young people to be a responsible community and a work ethic.
Conditions for a young volunteer for joining the Nation Building Army
1. Be a citizen of Tanzania
2. Must be between the ages of 18-23
3. Must have completed seventh grade and continue
4. He must not be married and have no dependents
5. Be willing to follow all the military rules that will be on him while in the military (escape, theft, drunkenness, smoking marijuana, drugs and abortion etc.) The military is a serious offense and you will be prosecuted and terminated by JKT
6. Be ready to return home after completing his contract with the Nation Building Army
7. Have good manners and conduct

Terms of lawful young man for joining the Army for Nation Building
1. Be a citizen of Tanzania
2. Must be between 18-35 years old
3. Must have completed Form Six and continue
4. Be willing to follow all the military rules that will be on him while in the military (Smoking bang, drugs and abortion will be prosecuted and terminated by JKT
5. Absenteeism is unacceptable and the absenteeism offense the contract will be moved forward
6. Have good manners and conduct

KNOW THE PROCEDURE FOR JOINING JKT
JKT enrolls young volunteers from all regions of the country every year. The procedure used is for JKT to write a letter to the regional commissioners and to identify the positions that the region has been allocated.
Read Also:
NEW JOB OPPORTUNITIES (1,816+ POSTS)

After the Region received a letter from the Head of JKT and the number of vacancies for young people scheduled to join. The province allocates those positions according to its districts. Districts are also required to deploy in divisions, counties and villages. District authorities often post advertisements for these vacancies on their bulletin board. JKT advertises opportunities to join the army through Government and private media with a view to speeding up the report. for citizens, especially young people. Preliminary interviews are held under the District Defense and Security Committees where the youths come from, later held in the region, to determine the number of youths in the entire region.
When the exercise is completed in the regions, JKT sends teams of officers and soldiers from JKT Headquarters to screen young people interviewed in all regions of Mainland Tanzania. Young people are tested for their health and transported to JKT forces.

JKT builds young people to be honest, truthful and dependable to the Nation

To prepare young people for a cohesive society and national unity regardless of their cultural, political and religious ideologies.

To prepare young people to have a heart of dedication and commitment.

It prepares young people to have a heart of patriotism, brotherhood and patriotism.

To teach young people to be obedient and respectful.