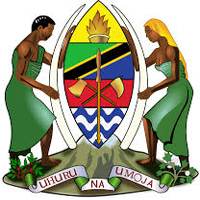 Simiyu Region is one of Tanzania's 31 administrative regions. The regional capital is the town of Bariadi. The region was created in March 2012, from part of Shinyanga Region.
According to the 2012 national census, the region had a population of 1,584,157. For 2002-2012, the region's 1.8 percent average annual population growth rate was the twenty-third-highest in the country. It was also the fifteenth-most-densely-populated region with 63 people per square kilometer.

Maswa District is one of the five districts of the Simiyu Region of Tanzania Inhabited by Sukuma (Nyantuzu People). It is bordered to the north by Magu District and Itilima District, to the east by the Meatu District, to the south by the Kishapu District, and to the west by the Kwimba District. Its administrative centre is the town of Maswa.


The Central Line railway from Tabora to Mwanza passes through the district from south to north and there is one train station within the district's boundaries at the village of Malampaka.
Administrative subdivisions
As of 2012, Maswa District was administratively divided into 26 wards.
Read Also:
NEW JOB OPPORTUNITIES (1,416+ POSTS)